Pete Fine, born in New York City in 1950, started studying guitar in 1963, and moved to Tucson in 1974. Having performed with ensembles of many different styles of rock and jazz-rock, as well as doing recording sessions and orchestra pit work, he has earned the reputation of being a virtuoso acoustic and electric guitarist. Adding to his resume, he is a self-taught composer and orchestrator. His first work for 12-string guitar and chamber orchestra, written in 1972, was released many years later under the German label Shadocks Records , and a subsequent work for electric guitar with full orchestra was spotlighted  in Guitar Player magazine in August 1982.

Having loved symphonic music all his life, Pete has had several more works performed in Tucson, most notably a Symphony for String Orchestra, an Electric Guitar Concerto (released on CD by the Catalina Chamber Orchestra conducted by Enrique Lasansky) and a suite for 12-string guitar, two vocal soloists, and orchestra.
In addition to these musical accomplishments, Pete has studied classical Indian music and is a performer on sitar, a popular North Indian stringed instrument.

An Evening With Beyond Words

Classical works featuring the debut of String Quartet No. 3. Admission is by donation. Proceeds will be split between St Marks UMC and Pima Animal Care Center. 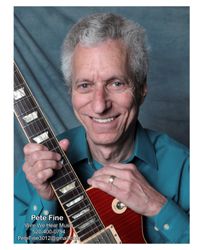 Guitar Recital featuring works for 12-string guitar followed by the premier of Concerto No. 3 for Electric Guitar with Virtual Symphony Orchestra.